Jessie died in December and was probably the last of our parents generation. Unles you know different. John was too poorly to attend her funeral and he too passed in January. John was instrumental in helping me with the blog in early days and we met up fairly often when he came down to visit his mum. John was a ' One Off' Clever, artistic and I enjoyed ur meetings.
In recent years he sported a magnificent moustache and here are a few pictures.
I am going to miss him.
I am also sending much love to his wife Sue they were such a great couple. 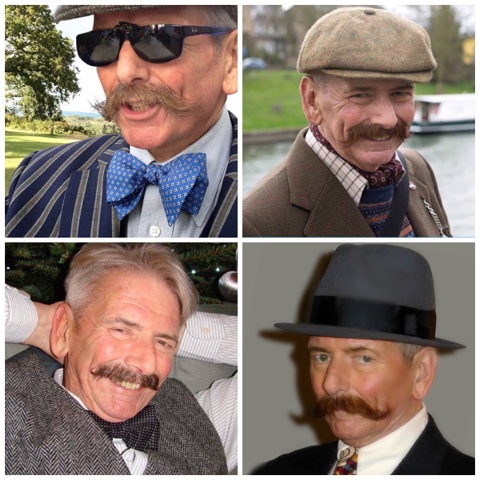 Subject: Still around Hi Jean/ just to let you know that at 82 I am still around and still spend a lot of my thoughts reminiscing about Ilminster and Summervale in particular and the wonderful childhood I had there until we moved back to London on my 12th Birthday. Hope you are keeping well (this is what I look like now!!!) Kind regards Terry xxx Hi Jean/ many thanks for your speedy reply. I am so very sorry to read of your COPD. Unfortunately as we get older our bodies do tend to start playing up. Very few of us are able to escape it happening to us. I have had 3 strokes the last one took a good part of my eyesight and I’m now registered severely partially sighted. Heart wise I have atrial fibrillation and a serious part blockage on a main heart valve but because of my past strokes they won’t operate on the basis that it would be too dangerous. I refer to myself (but not to anyone else) as ‘Mr Medication’. I can’t drive anymore and can’t take anymore holidays abroad but hey, I’m still here rather than in a fridge with a label on my big toe. My Wife Carol bless her fell over in the local market 3 weeks ago and fractured her left hand just below the wrist. The hospital has told her that it is going to be a long job so now she can’t drive either so I am now chief cook and bottle washer oh yes and ironer! Thankfully our next door neighbours are very good friends and take us wherever and whenever we need to go. I think that I have told you previously that when I returned to Summervale last (a long time ago) I found that the ‘kissing gate’ as the bottom of Brewery Lane approaching the rec was still there although it was best part hidden covered in weeds and long grass as the pathway had been moved just to the right of it so it was no longer used as in our time. Seeing it the memories flooded back and I could have cried. I was madly in love with Shirley Hewitt from somewhere around 9 years old until we moved back on my 12th. Birthday. Even at that age it broke my heart that I wouldn’t be seeing her any more. We were inseparable and her Mum treated me like one of the family . Along with our other friends we all tended to congregate around that gate. It was like a meeting place. Sadly as you know both she and her older Sister Iris have long since passed away. I find it a shame that your Summervale blog has fallen into misuse. I suppose as we all get that much older, it just had to happen somewhere along the line. Even at 82, I would still love to go back but I know that it isn't going to happen. No Jean I don’t know Irene. The name Forbes wasn’t known to me. Re IDF50, I have long since stopped using it. I put it down to the fact that with use and the great help it gave me, I gradually got cleverer and didn’t need it any more. I have now created a desktop shortcut to your site and will keep an eye on it. I would love to have this email mentioned in it as while it is unlikely, it just may stir something up. Please keep in touch Jean. Take care. I wish you well Terry xxx From: Jean Fisher
Posted by JJ at 17:39 2 comments:

GI am very sad to say that Janice died on 17th. January 2016 after a very long fight against cancer. Her prognosis was a few months but she exceeded everyone's expectations.

She died with her loving daughters at her side in California where she moved with John back in the 70's I think.

Growing up Janice always lived next door to me both in Summervale and in Paignton and I regarded her as my baby sister. In fact she was my bridesmaid when Mike and I married on 2nd. October 1965.
She was such a bubbly girl, full of fun and she had the most distinctive laugh which was so infectious.
I met up with her and John in Palm Springs several years ago and we met again in 2008 when we were on a road trip with four friends.
Thanks to the Internet we stayed in touch and even though she lost interest in Facebook I managed to keep in contact with her wonderful daughters Lisa and Kerry who have been their mother's rock during some very difficult times .
Such thoughtful girls, here is a recent post they made
"We tied mums scarf around lamp post in her honor and included our dads ashes too!!!  Emotional moment!  It's right by the carousel (which she loved) and beside the bridge called playmates arch!" 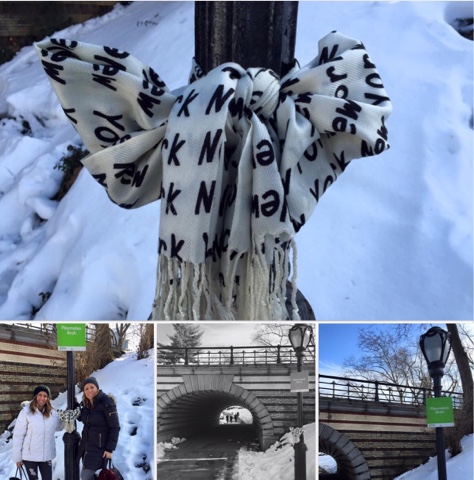 Sad to say that this very glamorous lady has died. Originally printed on August 5, 2015 in the Torquay Herald Express.Viewed by 6 Visitors.
Richards Marjorie Lillian Passed away peacefully on Wednesday 29th July 2015 aged 93 years. Devoted wife to the late Dick Richards. Beloved mother to Wenda, Carol and Philip. Adored grandmother to Melanie, Stephanie, Kim. Simon, Justin, Sian and James. Much loved great grandmother to her eight great grandchildren. Family and friends will miss her and her happy laughter. A service to celebrate Marjorie's life will be held at Torquay Crematorium on Monday 10th August at 2pm. Family flowers only please. Donations if desired to The Alzheimer's Society by retiring collection or sent to Torbay & District Funeral Service, Wellswood House, 11 Babbacombe Road, Torquay. TQ1 3SB 01803 315005

I have so many fond memories of  Mrs. Richards not least her laugh.
She was a very talented seamstress and made some super clothes for Wenda and Carol.
She took part in amateur dramatics in Ilminster and no doubt made many of the costumes.
A long and happy life. R I P .
Jean.

We have lost another of our Summervale family.

I received this email today from Doreen Powell

Hi Jean,
It's Doreen (Powell )
Are you still updated the Summervale Blog?
I have some sad news. Although not many remembered my brother Alan Powell, I have to inform you he passed away on New Years Eve 2014.
He was suffering from Motor Neuron Decease, although he was not expected to die so soon.
If you would like to pass this on.
I hope all is well with all the Summervale people.
Many thanks.
Doreen

I have not heard from anyone for many months, does anyone look in any more?
I am more than happy to keep it going but since the reunion everyone has lost interest. Such a shame. 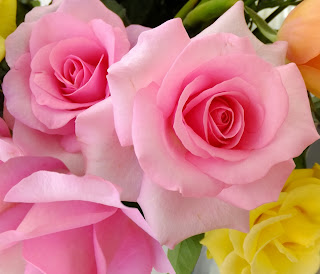 Someone Else has found us

Steve Lenthall
Nice to hear from you Steve although sorry to hear that you lost your Mum a year ago. She must have been a good age.
Was your Dad Doug Lentell, I remember that name and I think he worked with my Dad, Percy Boyce.
Is this the photo you meant, a very beautiful lady. 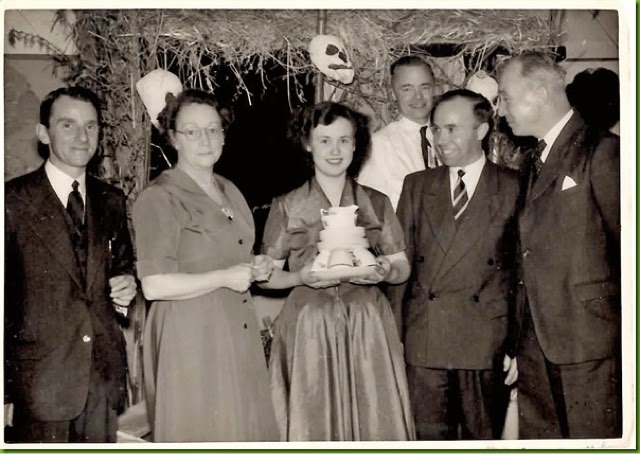 I recognise  Eddy Vane and Dave Laughton but not the others. If you have any Ilminster photos we would love to see them if you could email them to me.
Posted by JJ at 18:52 2 comments:

Another gone But not forgotten

FROM PETER WESTMACOTT
Reading through the Summervale blog recently, I was greatly saddened to hear of George Brown's passing.  A lovely man and a real gentleman. I was so pleased to have seen him again at the Summervale reunion in 2012.

I have some sad news too.  My mother (Joan) passed away on 11th August in Berkshire. She was 91, a good age. In the last few years she had been suffering from dementia and it affected her badly.  I would appreciate it if you would mention this on the blog as I know she knew so many people in the Paignton and Ilminster areas.  If you still have that lovely photo of her and we three boys sitting with her in my grandparents' garden, you could publish it if you like.

So two more Summervalians have left us .........
Peter,
I could only find the photo already posted so I have copied it and hope it is of reasonable quality. I remember your Mum had a lovely smile and was very pretty.
RIP JOAN. 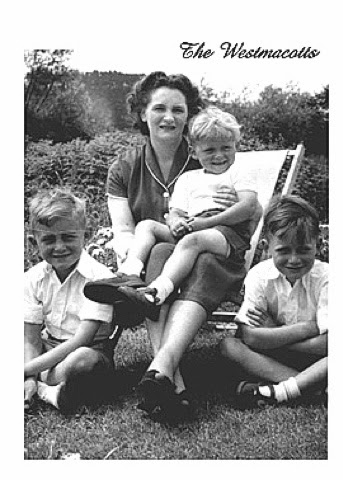 JUST A REMINDER THAT IF YOU CLICK ON A PHOTO IT WILL BE ENLARGED . VERY USEFUL FOR THOSE OF US WITH POOR EYE SIGHT?

WITH THANKS TO RON DIXON

WITHOUT THE WONDERFUL LEGACY OF PHOTOS LEFT BY RON DIXON THIS BLOG WOULD BE VERY BORING SO I WOULD LIKE TO THANK GLORIA FOR ALLOWING ME TO SHARE THEM WITH YOU.
HIS PHOTOS ARE A SNAPSHOT OF OUR HISTORY AND REVEAL MUCH ABOUT THE ERA IMMEDIATELY AFTER THE SECOND WORLD WAR.

Click on a photo to see the full sized image

WHERE ARE THEY NOW? I HAVE HEARD FROM THESE - **

Please email at
jeanjeannie44@yahoo.co.uk
which is my secondary address. If you received my original mail then use that address.
Looking forward to hearing from you.
Jeanni

JJ
Now officially retired after 11 years "medically" retired.Live with my husband of 44 years and close to our daughter and grandchildren. Absolutely LOVE my computer - especially my laptop as I can use it in bed - like now!